No Sewing but Lots of Prep

Well, I haven't sewn a single stitch since I finished my polka dotted shirt. Fear not though, because I have been cutting out lots of future projects. I have this idea in my head that I want about 10 things to be cut out so that when I want to make them all I have to do is pick them up and start putting some thread into them. Also, the only spot I have to sew is on the dining room table, so it is a bit easier to clean off the table and cut out a few things at once, than to have to clean it off each time I need to cut something out and then set up the sewing machine back up and then proceed to make a big mess all over again. I cannot claim to be neat and organized when I'm sewing. Instead I prefer to sling stick pins, throw fabric scraps in the floor, lose pages of pattern directions and cover every single surface within ten feet in bits of thread. Don't worry though, I do clean it up right away eventually.

Since I don't have anything new that I've sewn I thought that I'd show ya'll the fabric that I have been attacking with my scissors the past few days. Yes, attacking because my scissors are in dire need of a sharpening as are my pinking shears (which I am not even sure can be sharpened). Now lets get to the good stuff.

(Please excuse how bad these pictures are. I am a notoriously bad photographer. ) 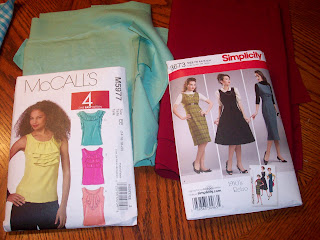 First up we have a McCalls top with ruffles, which I adore. I'm making it in a green cotton sateen. Next, is a retro reissue Simplicity jumper. The fabric is some odd feeling polyester suiting stuff that has a bit of stretch, which I am going to need considering I cut out a 14, which is the largest my pattern went to. 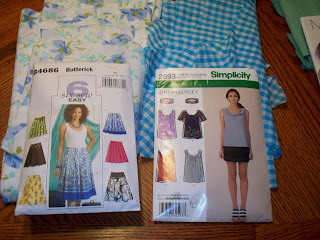 Next, on the left is a Butterick skirt. I am making the one in the bottom left hand corner which isn't pleated or gathered. The fabric is actually a vintage bed sheet that I bought at an estate sale. I held the cut out piece up to me and it seems a tad bit long though, so I might be shortening it some. On the right is a Simplicity Cynthia Rowley pattern that I intend of making in blue gingham. I'm making the version on the model, which has a cool rolled tube like looking collar. 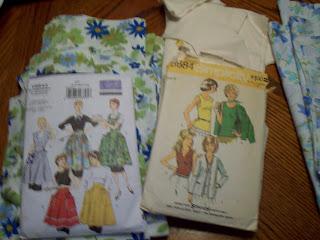 Next, on the left is another apron that is a Vogue vintage reissue. I am making the half apron that is in the top middle. The fabric for this one is also a very 70s looking vintage bed sheet. I still have another bed sheet with the same print that I need to find something to make with. On the right is a vintage pattern from 1973 that I intend on making. I'm just making the shell that goes under the cardigan, but I will be changing it slightly. The pattern calls for a knit, which I'm using but it also instructs you to put in a zipper. A zipper in a knit shirt? I think I'll skip it and I doubt I'll have any trouble getting it on. 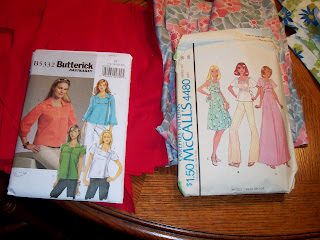 Oh yes, there really is more. On the left is a Butterick jacket that I cut out a few weeks ago, but haven't gotten around to yet. I'm making the version that is illustrated in green. On the right is another 70s vintage dress. I am (hopefully) making the shorter sundress version. I say hopefully because there is only one page of directions, which includes directions for all the garments included in the envelope. Yikes! 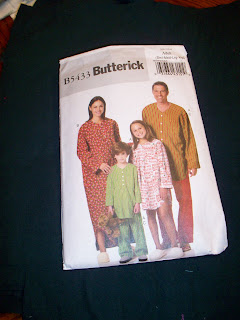 The last picture is actually the first thing that I intend to sew. It's a pair of pajama pants in hunter green flannel for one of my brothers.They might be just a bit tricky because they do have a fly front, but I'm sure I can figure it out.  I was supposed to make these as a Christmas present but I never got around to it and he hasn't let me forget. On a complete tangent, aren't those nightshirts some of the most awful things you have ever laid your eyes on? I think they are, which is why I tossed all the pattern pieces except for the pj pants.

Well, that is all for tonight. I am off to work on the massive mountain of laundry that awaits me.
Posted by Rebecca at 8:31 PM

Rebecca
I am a wannabe seamstress. I have new patterns, vintage patterns, fabric, buttons, zippers, and a plethora of sewing trinkets that I don't know what to do with. What don't I have? Any handmade clothing to show for all of that sewing stuff. So, I hope that you follow me as I attempt to master all the basics of sewing and finally put an end to being a wannabe! I love hearing from my readers! You can email me at wannabeseamstress (at) hotmail (dot) com.

Other Places to Find Me